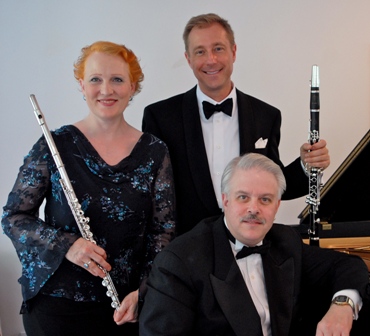 Dubbed “The Commissioners” by Chamber Music America magazine, Palisades Virtuosi has established an enviable presence in the chamber music world since its inception in 2002. They are thrilled to celebrate their 17th season of concerts this year in Bergen County! The founders are three friends, all who had hitherto enjoyed considerable success as individual performers, and who also shared a love of ensemble playing. After performing a few concerts together as a trio, they discovered that they had virtually exhausted the existing repertoire for flute, clarinet and piano. In the midst of gathering frustration an idea presented itself:  why not begin commissioning new works [by American composers] written specifically for their instrumental configuration? The concept was enthusiastically embraced and implemented. Now, to date, PV’s portfolio boasts nearly ninety new pieces, acquired either directly through PV’s “Mission to Commission”®, or by a work being gifted to PV by several and various composers. The collection, taken as a whole, exhibits an astounding richness and depth; the ages of the composers range from sixteen to eighty, displaying a staggering array of styles and approaches.  (For a comprehensive listing of the “Honor Roll,” visit their composers page).

The geographical “home-base” of PV is Bergen County, NJ, where they have performed their subscription concert series for the past 16 years. They have also travelled extensively, appearing at important venues which have included Carnegie’s Weill Recital Hall, the Bruno Walter Auditorium/NY Public Library at Lincoln Center, the venerable Stratford Summer Music Festival (founded by Glenn Gould), the University of Hawaii, Honolulu (where they have an informal “residency”), and the New York Flute Club, to name a few. Recently, PV has been named “Visiting Artists” at Bergen Community College (NJ) and are also In Residence at The Ridgewood Conservatory.

An important part of Palisades Virtuosi’s mission is to record and disseminate its new compositions. With the assistance of substantial grants from the Argosy Foundation Contemporary Music Fund, the Alice M. Ditson Fund of Columbia University, and private donations, six volumes of CDs have been recorded and released [by Albany Records]. They are in the process of recording Volume 7, “Songs & Stories”, a 2-Cd set of all their commissioned works that include narrator or voice, and hope to release it in 2020. These recordings have garnered rave reviews from such publications as Fanfare Magazine, American Record Guide, and Living Music Journal. Equally passionate about more traditional music, PV has recorded an album [“Palisades Virtuosi in Recital”/High Point Records], which features music of Bloch, Gaubert, Debussy, Scriabin, Saint-Saens and Danzi.

The Palisades Virtuosi is the artist ensemble of PV Music Trio, Inc. (formerly known as Palisades Virtuosi, Inc.) which is a 501(c)(3) organization established to promote and enrich the repertoire for flute, clarinet and piano.