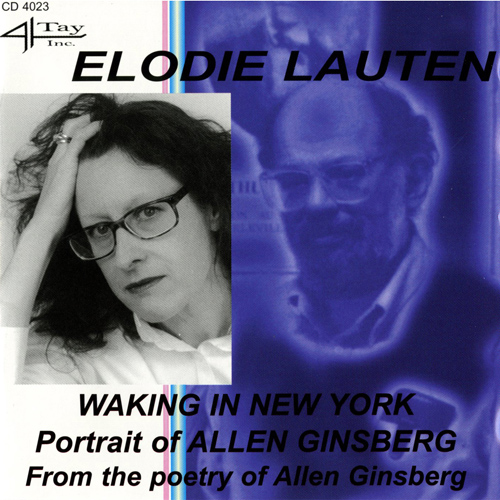 During the Summer of 1996, only a few months before his death, the late Allen Ginsberg put together a set of poems on the theme of New York, as suggested by Elodie Lauten for a musical setting. The poems he selected, from Cosmopolitan Greetings 1986-1992, Collected Poems 1947-1980, and White Shroud Poems 1980-1989 are highly autobiographical and reveal some of his most intimate thoughts.

Waking in New York is scored for baritone, soprano and mezzo soprano, percussion, double bass, string quartet and flute. The music closely follows Ginsberg’s own flow of mental associations, which act as triggers of rhythm changes and key modulations.

THE VILLAGE VOICE
“Despite the formality of its cantata-like structure, Waking in New York is certainly one of the most intimate large-scale vocal works ever written.(…) This is a large work for Lauten, but large works have become her metier; her recent Deus Ex Machina Cycle for singers and baroque ensemble was 100 minutes long … Waking in New York’s hovering harmonies, gentle but relentless momentum, and chantlike melodies remind one of another great vocal work, from the 1920s: Erik Satie’s Socrate, based on the last words of Socrates.(…) It’s worth remembering that Socrate was one of Frank Zappa’s favorite pieces. Born in Paris, daughter of the jazz dummer Errol Parker, Lauten seems a legitimate heir to Satie’s imperturbable aesthetic.”

THE NEW YORK TIMES
“Blues melodies, gospel and pop as a song cycle. (…) Waking in New York is actually a lovely, effective and affecting song cycle for vocal ensemble and orchestra. Ms. Lauten has treated Ginsberg’s poetry and its underlying spirit carefully, even reverently. She tucked its personal and sometimes diarylike texts into her own agreeably melodic and ecclectic style, but she also appears to have listened carefully for traces of the music that animated Ginsberg’s soul..”

NEW MUSIC BOX
“The poetry of Allen Ginsberg has inspired a wide range of composers from Lee Hyla (whose Howl pits the Kronos Quartet against a recording of Ginsberg reading his celebrated poem) to Philip Glass (whose Ginsberg settings include the eclectic Hydrogen Jukebox and Symphony No. 6 which is a Mahlerian adaptation of Ginsberg’s “Plutonian Ode”). In terms of authenticity, however, all are trumped by Elodie Lauten, who actually was Ginsberg’s roommate during the 1970s. Lauten’s Waking In New York, a poly-stylistic musical mŽlange residing somewhere between musical theatre and a requiem, is Lauten’s moving memorial to her creative mentor who encouraged her to pursue a career as a composer.”

7.Jumping the Gun on the Sun

9.Song: The Weight of the World is Love<

10.Waking in New York/Part I