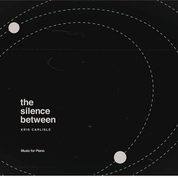 “The music is not in the notes, but in the silence in between” – W.A. Mozart

4Tay Records is proud to present The Silence Between, a marvelous new collection of contemporary, programmatic music for piano performed by Dr. Kris Carlisle. This is part of his ongoing American Evolution project.

A native of California, he has performed throughout the United States, Canada, Europe, Australia, and Asia to great acclaim.

Kris Carlisle received his training at the San Francisco Conservatory of Music and the Claremont Graduate University. He has studied with such noted artists as Louanne Long, Mack McCray, Lita Guerra, and Susan Svrcek. He has been the winner of many competitions and the recipient of various awards including: the Martha Fischer-Tye Foundation Award; a Special Achievement in Musicology Award from the Kennedy Center, Washington D.C.; and a Georgia Music Teachers Steinway Piano Galleries Educator Grant. Dr. Carlisle is Director of Keyboard Studies at Berry College, Rome, GA. Visit him at http://kriscarlisle.com.

3. Blood on the Curb – Greg Simon – See note below

The Language of Flowers – Matthew McCabe

15. Epilogue in B minor – Fahad Siadat

Please note that Blood on the Curb is misspelled on the CD package. Our apologies to composer Greg Simon for the error.