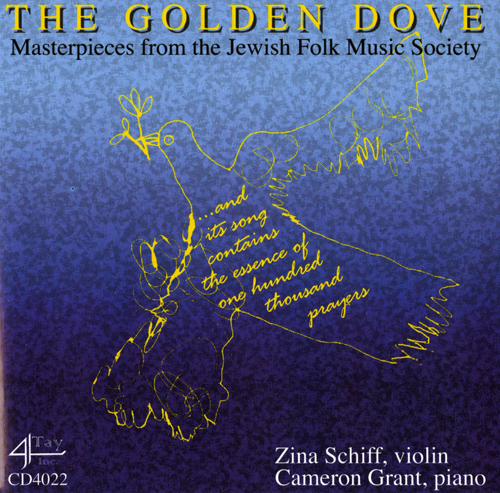 MUSIC & VISION DAILY
“A record prepared from the expertise of the Jewish Folk Music Music Society guarantees an authentic programme of traditional songs. These are not sung, but heard as transcriptions for violin and piano made by Russian composers: Rimsky-Korsakov, Engel, Feldman, Achron, Weinberg, Krein, Gniessin, Rosowsky and Saminsky. There is a decided continuity of style, mostly intense and reflective.

Performances are highly sympathetic to Rimsky-Korsakov’s enormous regard for the sensitivity of this special repertory, which just preceded the founding of the Jewish Folk Musio Society in 1908.

The American violinist Zina Schiff proves ideal for this material, matched by the excellence of pianist Cameron Grant.”

AMERICAN RECORD GUIDE
“Zina Schiff gives this music a deeply personal voice. She is a remarkable violinist with a huge range of color and nuance. She plays every piece on this recording with intensity and emotional depth. She and Cameron Grant play wonderfully together, but when Schiff plays with her daughter Cherina Carmel, it seems almost as if the two are playing one another’s parts.”

NEW YORK JEWISH WEEK
“Chamber music for piano and violin, featuring Zina Schiff and Cameron Grant, respectively (with Cherina Carmel filling in at the keyboard on two selections). The Jewish Folk Music Society was founded in St. Petersburg in 1908 at a time when the then-Russian capital was also a center of musical genius. Encouraged by Rimsky-Korsakov, who died before the organization was officially inaugurated, the Society drew from many of his students and was responsible for some truly magnificent music, including the 19 brief pieces recorded here. Schiff is a wonderfully expressive player, and Grant (and Carmel) offer sympathetic and subtle accompaniment. A very beautiful recording. Rating: AAAAA.”