Songs from The Bitterroot

This collection of original Americana compositions is performed by its composer Taylor Ackley. He is joined by the Deep Roots Ensemble, a passionate group of some of the most talented and creative performers of their generation, playing an eclectic mix of instruments ranging from the mandolin to the French horn. Their sound stiches together a quilt of musical influences from romantic chamber music to Appalachian ballads, all in support of Ackley’s poignant vocal delivery of his heartfelt songs. Also featured is Alison Rowe making her recorded vocal debut on “Love Letters” and composer Peter Winkler’s inspired setting of the Wendell Berry poem “Remembering.”

While his concert works have been performed widely in concerts in festivals throughout the United States as well as Denmark and China, Songs from the Bitterroot is Ackley’s first commercially released recording project. 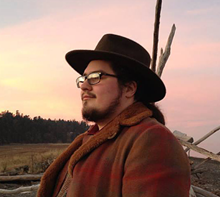 Taylor Ackley is a performer and composer of Classical, Jazz and Traditional American Music from Washington State. He is currently a graduate student at Stony Brook University, where he has studied composition with Ray Anderson, Perry Goldstein, Margaret Schedel, Daria Semegen and Daniel Weymouth. Along with his substantial success as a multi-instrumentalist, Taylor has been commissioned by a number of soloists, chamber ensembles, choirs and jazz bands.

Ackley is the Director of the Deep Roots Ensemble, a chamber music group which focuses on studying and performing Traditional American Music. It was formed in 2015 with the goal of bringing this rich tradition of music making into concert halls and academic settings. Since then they have performed extensively in the New York area, the Midwest and the Pacific Northwest along with giving lecture recitals, workshops and masterclasses.

7. Some Things Are Easy

9. Things I Left Back Home