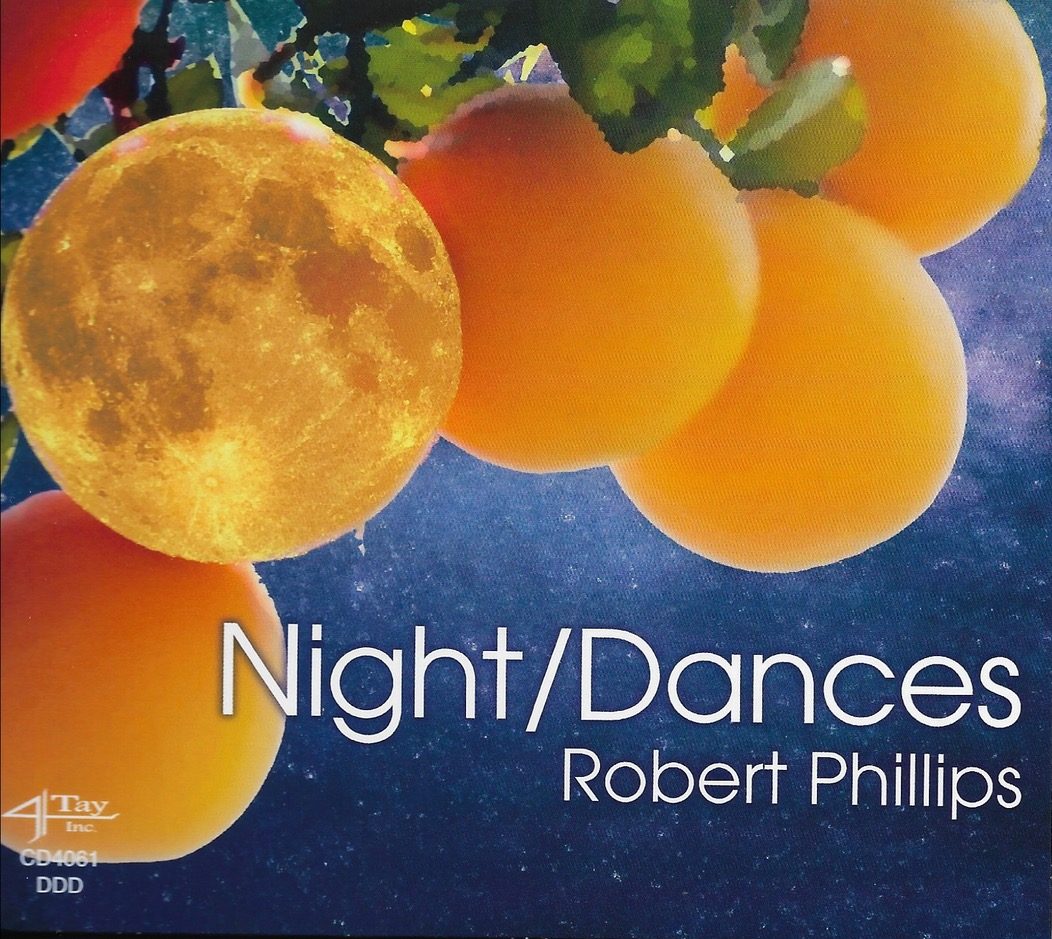 4Tay Records is proud to present Night/Dances, a collection of new works for solo guitar, selected and performed by renowned guitarist Robert Phillips.

The performer writes, “In 2016 I came up with the idea of commissioning some new music by composers who were currently living in Central Florida – people to whom I could easily drive from my home when I wanted to consult with them (or they with me). I wanted music that would be enjoyable to the casual classical – guitar listener, but that would equally engage the more rigorous demands of the sophisticated listener as well as the performer. I also wanted some music by com posers who played guitar themselves and could be counted on to write idiomatically, and some by composers who did not play the instrument and would stretch the boundaries of guitar technique to meet the demands of absolute music. I selected six composers, three of whom played guitar and three of whom did not. As I began to have conversations with them about the kind of pieces I wanted, the idea of having all of them use some sort of dance rhythm emerged. It was – only one more small step to conceptualizing them as a sort of suite that would be performed as a set, although each piece – would hold up well enough to be per formed on its own. What finally emerged were the Orange Blossom Dances.”

Robert Phillips has brought his brilliant interpretations to a diverse range of venues – from traditional concert halls including New York’s prestigious Town Hall, and Lincoln Center to jazz nightclubs. His performance at Weill Recital Hall at Carnegie Hall was sold out. Robert is also regularly featured as a conductor and as a soloist at the Chamber Art Madrid festival in Spain. In addition to the standard repertory, Robert performs his own compositions, and has premiered works by three-time Pulitzer nominee, Frank Brazinski, Eric Ross, Alfred Giusto, and Meyer Kupferman, as well as a concerto by three-time Grammy winner, Michael Colina. Dr. Phillips directs the guitar department at the Lois Cowles Harrison Center for the Visual and Performing Arts. He is also an adjunct professor at Southeastern University, where he maintains a classical guitar studio and directs the classical guitar ensemble. Dr. Phillips is a recipient of the Distinguished Service Award from Hofstra University’s George M. Estabrook Alumni Association, and of a Japan Fulbright. Visit him at https://www.robert-phillips.com/.

“Congratulations! The CDs arrived yesterday and I’ve been playing it ever since. It really is an excellent collection of music – and I’m delighted with your performance of my pieces.”
—John W. Powell, composer

“Thank you for the CDs. I like it. Job well done.”
—Jorge Morel, composer

“Thanks for the CDs. The album sounds great! Congrats and thanks again for including me in the project.”
—Troy Gifford, composer