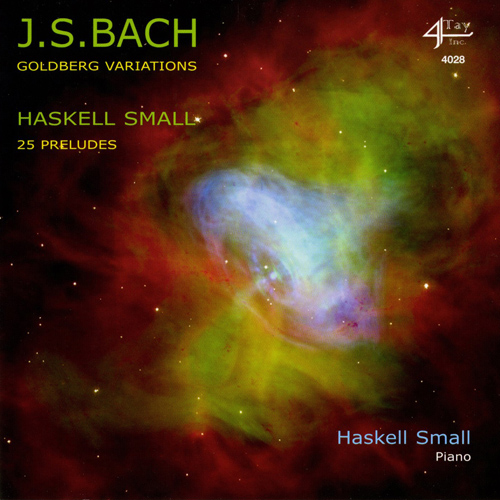 Hailed by England’s Musical Times for his “dazzlingly prodigious technique”, pianist Haskell Small has concertized with great success in major European capitals, South America, Japan and China, and has been enthusiastically received by American audiences in such venues as Carnegie Hall, the Kennedy Center and the Spoleto Festival. A prize winner in the Johann Sebastian Bach International Piano Competition, Mr. Small has received numerous awards and has been featured in the nationally broadcast PBS special, “A Celebration of the Piano”.

Following in the tradition of 18th- and 19th-century pianist/composers, Haskell Small is also an accomplished composer, who often performs his own works. He has received commissions from such organizations as the Washington Ballet, Three Rivers Piano Competition, Georgetown Symphony and Paul Hill Chorale, and he was the winner of the 1999 Marin Ballet Dance Score Competition. From 2000 to 2003, he was composer-in-residence with the Mount Vernon Orchestra. In 2005, Small completed Renoir’s Feast, a commission by the Phillips Collection to celebrate the return of their beloved painting, Luncheon of the Boating Party. Recent accomplishments include a publication by PeerMusic of his blues and jazz miniatures, Scraps, and the world premiere in New York’s Weill Hall by noted pianist Soheil Nasseri of the new work he commissioned Small to write, Lullaby of War.

Besides his newly released recording of Mompou’s Musica Callada, Small has recorded a number of CDs, among them a Gershwin disc, a Children’s CD with narrator Robert Aubry Davis, and Bach’s Goldberg Variations. In recent seasons, he has played recitals in Japan, Paris and London and participated in the 2007 Festival of American Music in Poland.

Haskell Small received his musical training at the San Francisco Conservatory and Carnegie-Mellon University, and has studied piano with Leon Fleisher, William Masselos, Harry Franklin and Jeanne Behrend, as well as composition with Roland Leich and Vincent Persichetti. Currently he is the piano department Chair of the Washington Conservatory of Music.

AMERICAN RECORD GUIDE
“Small’s reading of the Goldbergs sounds beautiful…Small’s own preludes are delicate and deft works with a gentle and refreshing command of a harmony built from extended triads. The great assets of Small’s own pianism – among them, unerring taste and clarity – serve the music very well.”

INDEPENDENT REVIEWER, DONALD SATZ
“Haskell Small – Pianist and composer, Small has a cult following along the East Coast of the United States. Judging from this disc, his following should be much more extensive. Small is an exceptional pianist of the highest order, and his compositions are always stimulating and easy to absorb.”

“(The Goldberg Variations)…Fantastic sonorities, graceful playing to die for, and superb voice interaction more than offset any concerns. Best of all, I’ve never heard a more lyrical account of the work.”

“25 Preludes – Highly interesting and varied music. It would be easy to say that these pieces are either other-worldly with notes evaporating into the universe or they are jazz-like with some ragtime and boogie-woogie elements. However, Small often blends these features together in the same variation. I have listened to this work many times, and its allure has not lost its shine in the least.”

“Don’s Conclusions – Highly recommended to all keyboard enthusiasts. The disc might be a little difficult to find, but the search is well worth the time.”

AUDIOPHILE AUDITION
“Mr. Small sports a fine technique, and he handles the Goldberg’s with aplomb and digital finesse. He keeps the repeats minimal, which allows him to complement Bach with own preludes from 1985. Small has no problem executing the virtuoso aspects of the writing nor articulating the varied lines of the canons at the ever-increasing intervals at the third of each thematic group. That Small appreciates the artful complexity of Bach¹s work is evidenced by his own liner notes and his intelligent, lucid playing.”

THE WASHINGTON POST, Joseph McLellan
“It takes a certain. . . let’s call it self-confidence. . . for a composer-performer to to put his own work next to that of Johann Sebastian Bach. Washington musician Haskell Small has such confidence and, remarkably, this well-filled disc shows that he is justified. His Bach may not make you throw away your Glenn Gould version, but it is clean and bright, played with exemplary technique, poised musicianship and a clear sense of the distinctive qualities in each variation His own miniature preludes sometimes call Bach to mind with dotted rhythms and touches of counterpoint, but many are uncompromisingly modern with jazz flavors, impressionistic nuances, crashing Rachmaninovian chords, virtuoso display and hints of dissonance. This disc is a delight from beginning to end, Small as well as Bach.”