Were I With Thee 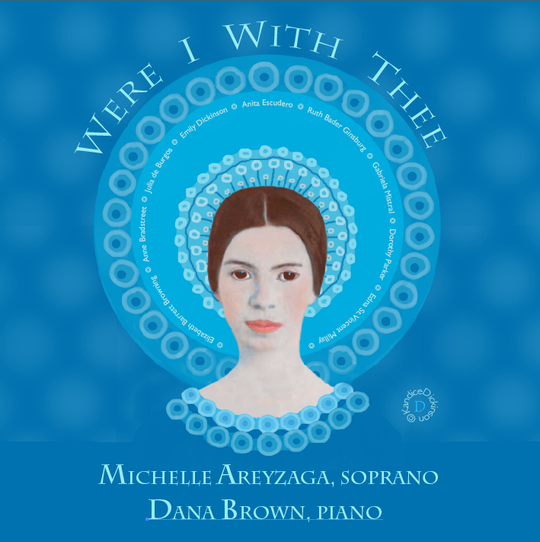 4Tay Records is proud to present Were I With Thee – performed by soprano Michelle Areyzaga and pianist Dana Brown. Texts and translations can be found here.

This project presents a unique American vision of women’s words set to song. The songs are all based on texts written by women authors from a variety of English and Spanish speaking countries, including the United States, England, Chile, and Puerto Rico. Among the highlighted writers is Emily Dickinson. “Were I With Thee” itself is a line from the her poem “Wild Nights – Wild Nights,” and this album contains three settings.

“This album will serve to introduce these works to young artists with the hope that they will be programmed on future recitals or albums. This is a female-uplifting project in all possible ways.”

And featured composer Gwyneth Walker says:
“Michelle is my favorite singer in the world, and now that I’ve heard Dana play, he’s right up there too in the same top category of excellence.”

American soprano Michelle Areyzaga has performed with the New York City Opera, Chicago Opera Theater, and the Orquesta Sinfónica del Estado de México, among many others. She has become well-known for her interpretation of the music of Leonard Bernstein, extensively touring the show Bernstein on Broadway together with Bernstein’s daughter and various orchestras. As a soloist, she has appeared with orchestras across the US and has appeared in various capacities across Europe.

Dana Brown, pianist, has been heard at the Tanglewood Festival, the Ravinia Festival, and many times on WFMT Radio as a collaborator, in addition to performances on WTTW’s “Chicago Tonight”, Light Opera Works of Evanston, L’Opera Piccola, the Chicago Cultural Center and the Chicago Humanities Festival. As a coach, he has been on the faculty of Northwestern University, the Intermezzo Young Artists Program, the Opera and Music Festival of Lucca, Italy, and most recently the Taos Opera Institute in Taos Ski Valley, New Mexico.

Richard Pearson Thomas | Texts by Emily Dickinson
From At Last, To Be Identified!

Lee Hoiby | Texts by Emily Dickinson
From The Shining Place

Patrice Michaels | Text by Anita Escudero
From The Long View: A Portrait of Ruth Bader Ginsburg in Nine Songs