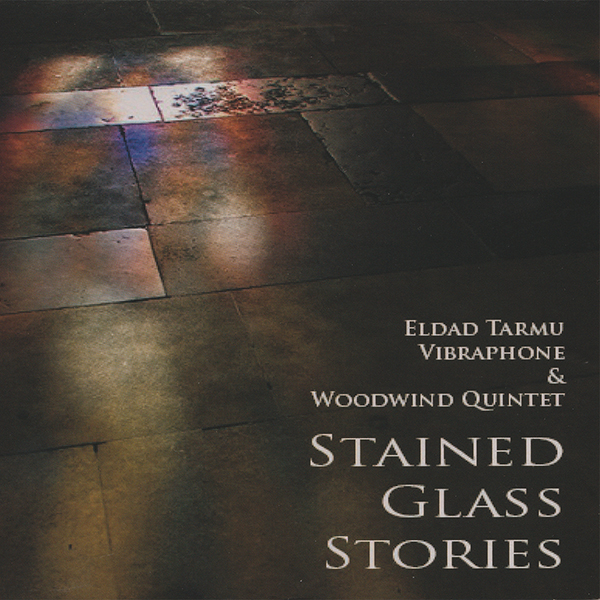 Visit This Artist
4Tay Records is proud to announce the release of Stained Glass Stories.

This collection of original contemporary classical compositions is performed by its composer, renowned vibraphonist Eldad Tarmu,
with a woodwind quintet.
His melodically driven chamber music uses traditional classical forms, with the occasional borrowing of jazz harmonic structures. The vibraphone and the woodwinds bring a fresh, sparkling, rolling, jazzing palette of colors and sonorities, resulting in a new approach to storytelling, via the contemporary classical chamber music medium.
After an extensive series of jazz and world music releases, Stained Glass Stories is Eldad Tarmu’s second chamber music CD. The first one, Songs for the Queen of Bohemia, released in 2008, proposed an innovative chamber jazz sound with ethnic stylings for a string quartet, vibraphone, bass and drums. Stained Glass Stories is more anchored in the chamber music traditions, while continuing to draw on Tarmu’s background as a jazz musician and on his originally eclectic approach to composition.
Eldad Tarmu was born in Los Angeles, California, where he started studying drums and percussion. He completed his Bachelor’s degree at Tel Aviv University in Israel.
In 2005, he received a Master’s degree in Afro-Latin Music, from California State University Los Angeles. The same year, he was appointed Head of the Jazz Department at “Richard Oschanitzky” Jazz School of Tibiscus

University in Timisoara, Romania. In 2009, he relocated to the U.S., where he pursued graduate studies at Stony Brook University, where he got a second Master’s degree, in Classical Composition. He is currently a Doctor of Musical Arts in Jazz Performance from the same school, under the guidance of Ray Anderson.

He has been teaching music in college and performing throughout the world, holding jazz clinics and workshops at festivals and music camps, in locations such as Belgium, Indonesia, Cuba, Romania, Hungary. Eldad is endorsed by

Mike Balter Mallets, which is now owned by Zildjian Cymbals.

1. Guarding the Queen of Bohemia