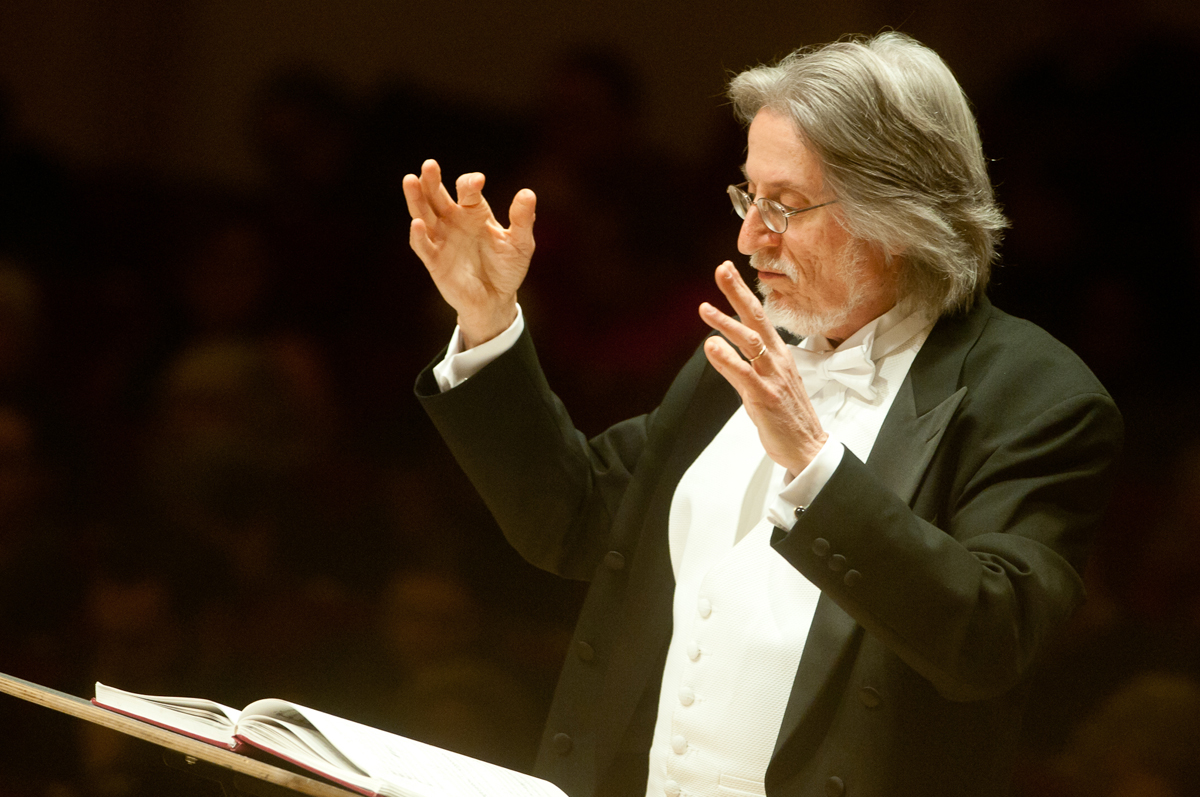 Recognized among the premier current interpreters of choral music, conductor Harold Rosenbaum is a singular force in vocal ensemble performance. The award-winning founder and conductor of distinguished professional choir The New York Virtuoso Singers and celebrated volunteer choir The Canticum Novum Singers, Rosenbaum attracts the finest choral talent from New York City and around the country to his world-class productions. Inspiring singers and audiences alike with gripping interpretations of both contemporary and classical compositions, he brings a profound wealth of technical ability and expertise to the creation of rich musical experiences. The New Yorker—lauding The New York Virtuoso Singers—reported, “Mr. Rosenbaum’s sixteen singers are virtuosi indeed, masters in a contemporary repertory that, but for them, we would seldom hear.” The New York Times praised him as “an astute programmer with an ear for the unusual” and commended The New York Virtuoso Singers for “an exquisitely blended sound, ” while The ASCAP Foundation writes, “Harold Rosenbaum has earned a significant place in the music life of New York and beyond as one of the most accomplished, versatile and critically-acclaimed choral conductors of our time.

In 1973 Rosenbaum established The Canticum Novum Singers, one of New York City’s premiere volunteer choirs. In its 45-year history CNS has performed close to 600 concerts across Europe and the Americas. The New York Times commended The Canticum Novum Singers as an “elite chorus.” From the talented roster of amateur singers who have sung with CNS, well over 100 have become professional choristers, soloists, conductors, and composers. CNS has premiered over 60 compositions, including works by Handel, J.C. Bach, Fauré, Bruckner, Harbison, Berio, Schnittke, Rorem, Schickele, Sierra, and Benjamin.

In pursuit of his dream to conduct the best choral compositions of the 20th century and after 15 years of resounding success with The Canticum Novum Singers, Rosenbaum founded a professional choir, The New York Virtuoso Singers, in 1988. Now in its 32nd season, NYVS performs regularly with leading orchestras and at eminent institutions such as The Tanglewood Music Festival and The Juilliard School. It has premiered close to 500 works by renowned contemporary composers such as Berio, Harbison, Henze, Andriessen, Ran, Perle, Krenek, Musgrave, Harvey, Pärt, and Imbrie, and by 50 recent winners of The ASCAP Foundation Choral Commissioning Program.

The choirs have performed many times on Lincoln Center’s Great Performers Series and in concerts with notables including James Galway, Tony Bennett, Licia Albanese, Marianne Faithful, Leonard Slatkin, and The Lincoln Center Chamber Music Society. Rosenbaum has appeared countless times on radio and TV, including an appearance on The David Letterman Show for the Millennium New Year’s Eve celebrations and a Christmas episode of CBS TV’s 48 Hours, ‘The Mystery of the Nativity.’

In addition to his work with CNS and NYVS, Rosenbaum is also a much sought-after guest conductor, clinician, adjudicator, funding panelist, coach, lecturer, and consultant. He has led various American choirs on 31 choral tours of Europe, Canada and Costa Rica. He has worked with many of the best ensembles and organizations in the world. In the United States alone, Rosenbaum collaborates frequently with leading orchestras and conductors such as The New York Philharmonic with James Conlon, an astonishing 59 times with The Brooklyn Philharmonic and Robert Spano, Lukas Foss, Dennis Russell Davies, Michael Christie, and Grant Llewellyn, The American Symphony Orchestra with Leon Botstein, The American Composers Orchestra with Steven Sloane, The Riverside Symphony with George Rothman, The Orchestra of St. Luke’s with Sir Charles Mackerras and Robert Spano, Concerto Köln, The Bard Festival Orchestra, The Westchester Symphony Orchestra, and The Juilliard Orchestra. In addition, he has collaborated with The Paul Taylor Dance Company, Continuum, P.D.Q. Bach (in Carnegie Hall and Avery Fisher Hall), The Mark Morris Dance Group, Bang on a Can, The Glyndebourne Opera Company, S.E.M. Ensemble, Da Capo Chamber Players, The New York Youth Symphony, The Prototype Festival, Opera Dolce, and The Bel Canto Opera Company.

Rosenbaum has a great passion for unique and challenging projects. His recent enterprises include such features as a performance of Mozart’s Requiem in the summer of 2010 as part of a festival sponsored by the Varna Music Academy in Israel. He conducted choral music of William Schuman, founder of The Juilliard School of Music, with The New York Virtuoso Singers at Juilliard in the fall of 2010. In 2012 he conducted the Verdi Requiem in Italy and lead The New York Virtuoso Singers on a tour of Denmark and Sweden. In the spring of 2013 he returned to Juilliard to conduct a vocal ensemble at the memorial concert for Elliott Carter, while in the summer of 2014 he led an ambitious European project, training American singers to join others from around the world in a performance of Haydn’s Creation in St. Stephen’s – Haydn’s church in Vienna.

Beyond his numerous professional commitments, Rosenbaum shares his skill and passion as an active educator. He is Professor Emeritus at the State University of New York (SUNY) at Buffalo, where he directed the choirs and headed the graduate program in choral conducting. Previously, he taught at the Juilliard School, Queens College, and Adelphi University. His dedication and output are remarkable; during one season, he was a full-time professor at both the University at Buffalo and Queens College while conducting five non-university choirs. As part of his continuing support and mentorship of aspiring conductors, he founded The Harold Rosenbaum Choral Conducting Institute, an annual program of choral conducting workshops at Columbia University, and NYU.

Rosenbaum’s untiring devotion to music has spurred many other ambitious projects. In 2015 he created ChoralFest USA—A Celebration of the Diversity of Choral Music in America, an annual marathon concert dedicated to showcasing talented choirs from the New York City area and beyond. He also shares his years of expertise in contemporary choral interpretation and performance by editing the Harold Rosenbaum Choral Series with G. Schirmer Publishing and a contemporary choral music series called New Voices published by Peermusic Classical. With these companies, he is responsible for the publication of choral pieces by nearly 20 composers including Milton Babbitt and Samuel Barber. His passion for contemporary choral works has generated vibrant connections in the musical community, and he is widely known for his encouragement and patronage of new American composers. He has personally commissioned music from 110 composers and conducted approximately 550 world premieres including works by such greats as Ravel, Schoenberg, Dallapiccola, Schnittke, Carter, Henze, Berio, Perle, Harbison, Corigliano, Lang, Zwilich, Adamo, Ran, Musgrave, Bolcom, Danielpour, Thomas, Wyner, Tower, and Kernis. As founder of Virtuoso Choral Recordings, he partners with Adam Abeshouse Productions and 4Tay Records to record the music of living composers. He has recorded contemporary choral music on 45 albums for numerous labels including SONY Classical.

To fulfill his lifelong passion of bringing together choral singers from diverse backgrounds and skill levels, Rosenbaum has founded The Canticum Novum Festival Choir, Westchester Oratorio Society, Long Island Jewish Choral Society, and Westchester Jewish Choral Society. As conductor of eight university choirs, seven church choirs, ten synagogue choirs, two youth choirs, and a senior adult choir, he has conducted approximately 1,750 concerts. Many of his efforts are collaborative, including events such as a seven-choir combined performance of the Verdi Requiem at Carnegie Hall and a production of Haydn’s Creation with the Queens College Preparatory Choir, Transfiguration Lutheran Church Choir of Harlem, and Westchester Jewish Choral Society. For his accomplishment and inter-religious outreach Rosenbaum was awarded the Most Remarkable Ecumenical Achievement Award by The New York Times..

Rosenbaum has received numerous honors throughout his career, including the 2008 American Composer Alliance Laurel Leaf Award for “distinguished achievement in fostering and encouraging the performance of new American works,” ASCAP’s 2010 Victor Herbert Award for Distinguished Service to American Music “in recognition of his contribution to the choral repertory and his service to American composers and their music,” and the 2014 Ditson Conductor’s Award. He is also a four-time recipient of the ASCAP/Chorus American Award for Adventuresome Programming of Contemporary Music and a winner of Chorus American’s American Choral Work Performance Award.

A life-long resident of New York, Rosenbaum studied at Queens College (BA ’72, MA ’74). In 2011 he was recognized for his many achievements with an honorary doctorate from his alma mater. His first book on choral conducting, titled A Practical Guide to Choral Conducting, was released in the fall of 2017 by Routledge. He currently resides in Westchester County with his wife Edie.