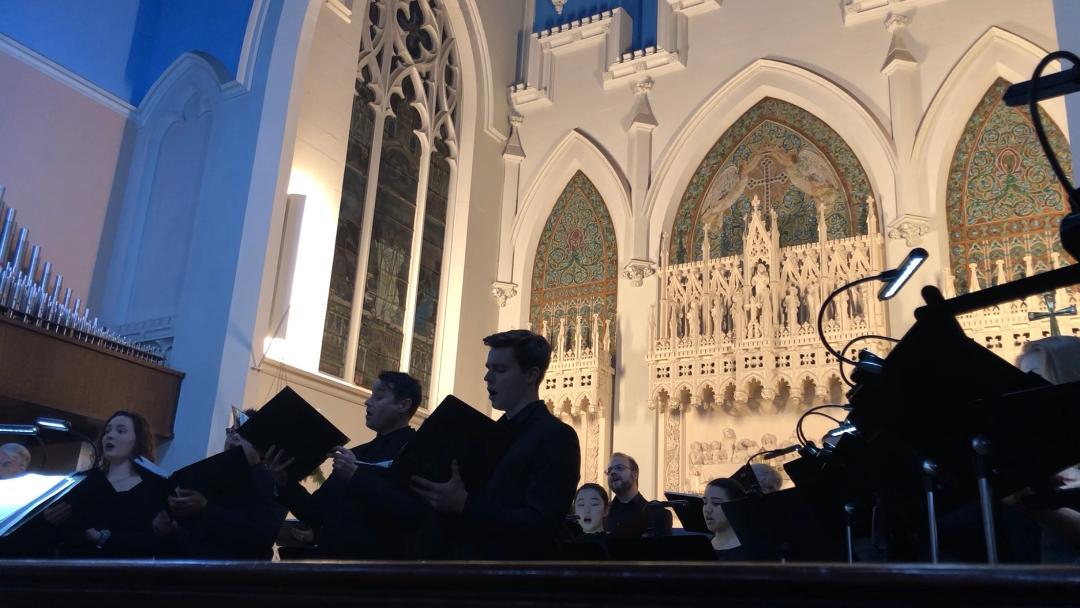 The Canticum Novum Singers, hailed by critics and audiences alike, is now in its 47th exciting season under the direction of its founder, Harold Rosenbaum. During the past 46th years, this chamber choir has achieved both national and international recognition for its stylistic versatility, vocal blend, and expressive range. The ensemble has presented dozens of world, American, and New York premieres by composers ranging from Handel, J.C. Bach, Fauré, and Bruckner, to Harbison, Berio, Schnittke, Rorem, Schickele and George Benjamin.

The group has been heard in more than 50 radio broadcasts on WNCN, WQXR, WNYC, WBAI, and NPR. Its “St. John Passion” performance at the prestigious Madiera Bach Festival was broadcast throughout Europe, and its annual recital on WNCN was for years a holiday tradition. The chorus has performed in the P.D.Q. Bach concerts at Carnegie Hall, has appeared with Peter Schickele on WQXR’s “The Listening Room,” and has performed the music of Mr. Schickele on the Great Performers series produced by Lincoln Center and later broadcast on NPR’s program “Schickele Mix.” The Canticum Novum Singers and The Canticum Novum Youth Choir were featured in a nationally broadcast episode of CBS Television’s 48 Hours entitled The Mysteries of the Nativity.

Other highlights include concert tours of Italy, Spain, Germany, England, Scandinavia, Eastern Europe, and France; and in this country, seven performances in the Concerts for Peace series at The Cathedral of St. John the Divine, five appearances in the Wall to Wall concerts at Symphony Space, a performance with James Galway, annual performances with The Brooklyn Philharmonic in the Interfaith Committee of Remembrance concerts at The Cathedral of St. John the Divine, Oxford University Press’s 500th anniversary concert at Carnegie Hall, five appearances on WQXR’s “The Listening Room,” live concerts on WBAI, and an appearance on WOR TV’s Arthritis Telethon.

The Canticum Novum Singers is a recipient of a Lincoln Center Community Arts Project award. During the summer of 1996, the group participated in the Siracusa International Music Festival in Sicily, and in July of 1997, it participated in festivals throughout Great Britain.

Recent special events include: a tribute to Italian film composer Ennio Morricone at Radio City Music Hall. This concert was also performed at the General Assembly of the United Nations. CNS also performed a 200th birthday tribute concert honoring American poet Henry Wadsworth Longfellow, with all 5 of his great, great grandchildren present. The women of CNS, plus members of Mr. Rosenbaum’s University of Buffalo choirs collaborated once again with the Brooklyn Philharmonic in a performance of Gustav Holst’s “The Planets.” And to help Symphony Space celebrate its 30th season of Wall to Wall concerts, the group recently sang Bach’s Mass in B Minor with The American Symphony Orchestra.